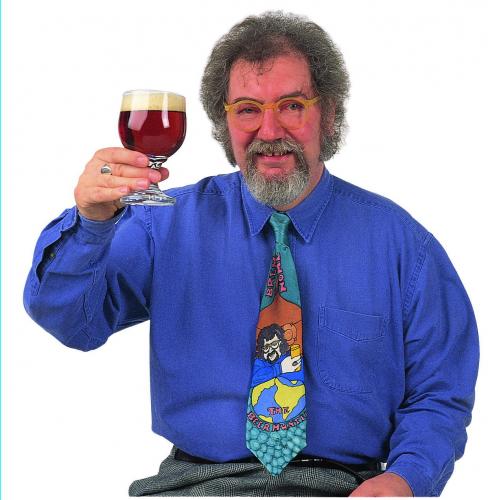 Michael Jackson (27 March 1942 – 30 August 2007) was an English writer and journalist, author of several influential books about beer and whisky.

Jackson started his work in a local Yorkshire newspaper in 1958 at the age of 16, having even earlier submitted news stories and jazz reviews. Suring the following 20 years he worked as both a writer and editor and contributed to dozens of publications and also made documentary films. In his frequent travels he became deeply interested not only in drinking a wider range of beers, but how they were made and their origins.
Shortly after the Campaign for Real Ale (CAMRA) revived interest in traditional beers in Great Britain in the 1970s, Jackson began to write more about beer. Initially he had nothing to do with the starting of CAMRA, but joined early on. By that time he’d already traveled quite a bit as a journalist, and tasted interesting beers in other countries. Jackson was aware of the Belgian traditions and wanted record Belgian beers before those breweries didn’t exist anymore. As Jackson said, he didn’t see it as a career possibility, but all journalists have in them a sort of element of being an advocate, so in 1976 he published his first book about beer, The English Pub. But it was his second, the World Guide to Beer (1977) that dovetailed with a quite young beer and brewing revolution in the United States. The book became a bible for both brewers and drinkers reconnecting with traditional beer.

Jackson's books have sold over three million copies worldwide and have been translated into eighteen different languages. He is widely credited with popularising the idea of beer styles. His influential television documentary series The Beer Hunter was shown in fifteen different countries and remains a cult classic almost 20 years after it was compiled.
Michael Jackson was also an important reviewer of whiskies. In his book The Malt Whisky Companion, he reviewed a large number of whiskies and gave them marks from 0–100, considering only those with a score above seventy-five worth purchasing. In many ways, his work in the world of whisky exceeded his significance as a beer writer. He was arguably the most important writer on whisky since the Victorian commentator Alfred Barnard and certainly the most significant and influential modern whisky writer. This was recognized by the prestigious award of "Master of the Quaich" and the prodigious sale of his whisky books and sell-out attendances at his tastings. He had enormous influence on the development of single malt whisky globally. Michael Jackson's Malt Whisky Companion (1989) is the best-selling book on the subject in the world.

He considered himself a journalist first, but also took equal pride in the words he put to paper. He was a regular contributor to most British broadsheets, particularly The Independent and The Observer.
At the time of his death Jackson had been suffering from Parkinson's disease for at least a decade. He did not declare his illness until his symptoms caused some to think he was drunk. Michael Jackson died of a heart attack in his home the morning of 30 August 2007 at the age of 65.