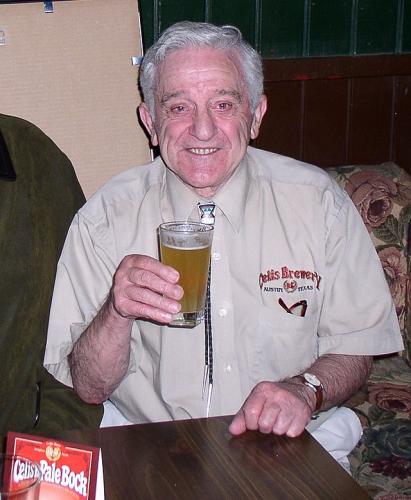 Pierre Celis, born on March 21, 1925 was a Belgian brewer who opened his first brewery in 1966 to revive the wit beer style in his hometown of Hoegaarden.
Celis grew up working on his father's cattle farm, but also helped out in the brewery of his neighbour Louis Tomsin. Tomsin brewed wit beer, which was a speciality in the region around Celis' home town
After Tomsin closed his brewery in 1955, wit beer disappeared from Hoegaarden.
It was Pierre Celis who saved and revived spiced wheat or "white" beers style of East Brabant. The region has rich, dark soil ideal for growing barley, oats and wheat. Brewing in the area has been traced back to 1318, when it was in the hands of farmers and monks. By the 1500s Hoegaarden had a brewers' guild and in the 19th century there were some 30 breweries in the small town.

The special character of the white beers of Brabant was created not only by the use of wheat and oats alongside barley malt, but also exotic spices and fruits brought to the Low Countries by Dutch traders. Hoegaarden became the centre for brewing the style, but in the 20th century the white beer breweries started to close, unable to compete with mass-marketed lagers, in particular those produced in Leuven by Stella Artois. Close of the last brewery in Hoegaarden was mourned by many in the town, including Celis, a milkman who had done some part-time work in the brewery when he was a schoolboy.

He was drinking in a bar with some friends one evening and they started to reminisce about the much-missed local beers. Celis decided to make a batch in his wife Juliette's copper. He remembered the ingredients from his time in the brewery. Grain and hops were easily available, and he added milled coriander seeds and Curaçao orange peel. The first year he started out with a wash tub in the barn of his father. With a loan from his father he bought equipment that came from an abandoned brewery in Heusden-Zolder. His beer was so well received that he decided to make it commercially. In 1966, he bought a small brewing plant and installed it in the stables next to his house, but demand for the beer forced Celis to move into larger premises – a derelict lemonade factory. His first batch of Hoegaarden beer was made on 19 March 1966 and he opened Brouwerij Celis (Celis Brewery). In 1980 he opened Brouwerij de Kluis as he transferred the production to new buildings. In the late 1980s his brewery burned down. Because the buildings were not insured, he was forced to sell his company to Interbrew, now AB Inbev. He then founded the Celis Brewery in Austin, Texas, which was managed by his daughter Christine.After Celis was acquired by Michigan Brewing Company, he went to work for them to maintain quality of their beer.