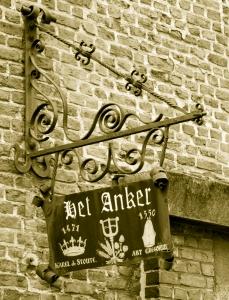 
The brewery itself, which as one of the oldest in Belgium (1369), can count on a rich history, reminds of former times. The courtyard lies strewn with excellent cobblestones; on a tympan shines in grey stone the year 1625, and the three copper kettles in the brewing hall dates of just after the second world war.
The brewery, which as the years pass by had fallen into decline, got in the nineties a considerable overhaul. Charles Leclef, the fifth generation of the family which had bought the brewery in 1873, started with the restoration of the old buildings and modernised the refrigeration, fermentation and lagerings installations.
In spite of that small-scaliness , a large part of the beer has been nevertheless intended for the foreign country. The foreign consuming market is rather large. For example Japan, Mexico, United States, Denmark, Italy, France, the Netherlands, Great Britain, Scandinavia, Australia: they all belong to the export countries of the brewery. And the beer is really tasted in more than 25 countries. Proofs of it are the international prices which Gouden Carolus, named after the golden currencies of Charles the Fifth, has pinched. In 2004 the christmasbeer of the same name won a silver medal on the biennial World Beer Cup, a competition with participants from forty countries. The Gouden Carolus Triple won two year before already in the same competition.